The Men in the White Coats

The room fell silent. The type of uproarious silence louder than sound itself. I’d never felt the “roar” of silence until that moment.

The men in the white coats had entered the room minutes prior along with a social worker and a children’s psychologist. My parents stood at my bedside while I lay, uncomfortable, listening to the rhythmic beeping of my heart monitor.

“I regret to inform you that your son has cancer.”

Words that nobody wants to hear, but in a strange way, they eased my mind. I always had a particular distaste for mysteries. Knowing something was better than not knowing at all.

As the silence grew to a crescendo, the man that had uttered those words moments prior decided to break the silence. “He has a stage 4—“

My mother screamed in agony and broke into tears throwing her arms around me. My father was still. Silent. Staring directly at the man who had just broken the news.

“He’s going to need surgery and chemothera—“ he attempted to continue.

“How long?” My father asks.

“About three weeks at best. We’re going to try everything we can to—“

This time I interrupted. “Three weeks until what?”

The white coats all looked to the psychologist and she gave a nod.

“Three weeks until you die.” He says solemnly.

My mother cries louder as my father, now broken of his stillness, attempts to console her.

All eyes in the room shift to me completely dumbfounded. This stops my mother from crying and I can see a smirk begin to grow on my father’s face. He knew. He always knew.

“I don’t know how long I’ll live exactly, but it won’t just be another three weeks.”

Everyone is shocked and in complete silence. A type of silence that I now controlled.

They had never received a response such as this one, and certainly not from a 4-year-old.

The psychologist responds first. Addressing my parents and refusing to make eye contact with me.

“He’s clearly in shock. This is a completely normal response. We can get him into thera—“

My father stops her. “You heard my son. Leave us. We will figure out the treatment later.”

They all understood and turned to leave the room, all heads fixated toward the floor, as if rehearsing for the funeral procession that they were certain would inevitably come.

Three weeks came and went. Then a few more weeks. Then months. Then years. And as the years passed, by I looked back on that moment and tried to understand exactly what I had done that made this story possible.

You see, I wasn’t just another cancer story. I was the first stage four tumor in California. A stage four Wilm’s tumor in my left kidney to be exact. After two years of chemotherapy, seven sessions of radiation, seven blood transfusions, and over 18 hours of docked surgery time, my story came to be considered a “miracle.”

I, however, consider it a responsibility.

It is my conviction that “miracles” assign responsibility to something else. As if something mystical, godly, or whichever you so choose to believe took your life into their hands, taking responsibility for your life when you could not.

I’m sure there is truth to a higher power helping us in our times of need, of course. We are only human after all.

However, in my experience, this power does not give out responsibility.

Responsibility is a choice. It’s a decision taken that you can do something about whatever is occurring as well as whatever is yet to occur.

The decision to be responsible is always the first step.

When I was given that cancer diagnosis, I did not know what the men in the white coats were speaking of. All I knew was that I had seen them be wrong before, and all they did was come into my room to give me more pain. That was the entirety of my reality at the time.

As soon as they told me I was going to die, something in me came to life. Something that told me that life was my decision and nobody else’s. If I had taken heed of their maundering, I would’ve given them responsibility over my life.

I chose to take responsibility and live.

As I traversed through my life and into adulthood, I wanted to see just how far this went. I wanted to be certain I had stumbled upon something workable. Something real.

I noticed that the successes in my life came from genuine moments of responsibility. Anytime I failed at an endeavor. it was because I failed. Nobody made me fail; nobody took anything away from me.

No matter how much I kicked and screamed at the time, blaming the world or whomever around me, I always found this to be true when looking back with a calm mind.

It was always me. Always.

When you take responsibility for the things that occur in your life, you are being the deciding factor over your own future. You are shaping the future in the present time.

I truly believe that in moments of genuine responsibility, we are creating the “miracles” that everyone speaks of.

I know that this seems easily said and not so easily done. You’re absolutely right.

There are things that have occurred in your life that I am sure you’re certain just happened to you. You are a victim of some awful experiences. This is very true.

As I understand it, the worst experiences tend to come from a man in a white coat.

“You have bipolar disorder.”

“You have celiac disease.”

“You have an eating disorder.”

The men in the white coats say these things to us and shake our worlds. They say them with so much certainty that anything said in opposition would be considered a further solidification that there is something “wrong” with us.

As you hear things from the men in the white coats, I want you to remember one thing:

They are not Gods.

They do not have the final word. They are not fortune tellers and do not have any more data than you do. They simply have more medical terminology.

Now don’t get me wrong, they can be helpful and courteous as they are not inherently bad people. Quite the opposite, as they’ve chosen a career dedicated to helping others.

I am simply saying that they do not have the final word. Their “diagnosis” is not the final factor of your life.

Your Life Is Yours

You are in charge of your own life.

You are in the driver’s seat. Others may speak while you’re driving, but remember that you can always turn the radio up and drown out the sounds of the passengers and cars on the highway as you focus steadily on the destination.

You can always, at any time, choose a better course for your own life.

I am not saying it is easy, however, I am saying that it is worth it. Your life is worth it.

Take responsibility and create a “miracle” to be admired.

Decide what’s next for your future, and be free.

With All Due Respect, 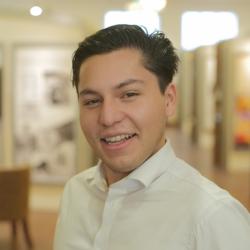 About the author: Richard Landeau
I am a 27 year old freelance writer that specializes in Human Behavior and Life Improvement articles/essays. Would you like me to write for your site? I would too! Let’s work together! Check out my work on the website below or Email me: Richardlandeau@gmail.com
SaveSavedRemoved 0

5 Essential Strategies for Working from Home as a Disabled Person