Home » Blog » Why Aren’t We Talking About the Disabled Actors in ‘Monster: The Jeffrey Dahmer Story’?
DisabilityNews & Views

Why Aren’t We Talking About the Disabled Actors in ‘Monster: The Jeffrey Dahmer Story’?

Unless you live under a rock, you’ve probably seen or heard about Monster: The Jeffrey Dahmer Story, which is currently #1 on Netflix in the U.S., with over 196.2 million hours viewed according to IndieWire. For better or worse, the world has been watching, and by now you’ve probably seen the controversy on Twitter and Tiktok discussing the show’s gruesome nature, and the fact that victims’ families were not notified or compensated by the producers. Yes, the victims’ families deserve reparations. Yes, it’s gruesome and grotesque. Evan Peters’ performance is frightening. Chilling. Absolutely horrifying. But to ignore the important disabled representation in this series — and the all-too-common violence against disabled people of color that it illuminates — is not doing it justice. Millions of people have watched Monster: The Jeffrey Dahmer Story since its debut and I haven’t seen one article on the disabled actors in the series.

Rodney Burford Jr, who plays Tony Hughes, is an actually deaf actor who made his first on-screen appearance on the Netflix show Deaf U produced by famous deaf actor and model Nyle DiMarco. Tony Hughes meets Dahmer while trying to start his modeling career and unfortunately becomes one of his victims. Burford’s portrayal of Tony Hughes is vibrant, colorful, and loving. At one point in the episode, you experience the world from his perspective, with a striking feedback audio loop that gives you a hint of what it’s like to be deaf. There’s a low pulsating hum throughout Burford’s on-screen appearances.

The episode shows Tony Hughes at a gay bar, where he flirts with non-disabled men who consider him attractive. When he hangs out with his friends (who are also actual deaf actors played by Michael Spady and Jared Perez-Debusk) he’s expressive and casual in signing and uses Black ASL. The use of #BlackASL is rarely showcased on screen. According to the Washington Post, Black American Sign Language (BASL) or Black Sign Variation (BSV) is a dialect of American Sign Language (ASL). Black ASL was more in line with the traditional version of ASL, like using two hands when signing. Black ASL uses more facial expressions and personality, and some signs can have different meanings or nuances.

Burford’s Tony Hughes is moving, raw, and real because of authentic disabled representation. Most of the time when you see disabled representation on screen, it’s from the viewpoint of able-bodied people interacting with us and the feelings that follow. That’s a tired trope. In a particularly powerful scene, Michael Spady’s character points out, “You’re Black, gay, and disabled,” when Hughes shares his modeling career aspirations, to which Hughes responds, “Yeah, and that hasn’t stopped me yet,” with a connective, interlocking gesture. That scene could have easily been misconstrued as “inspiration porn” for the able-bodied audience, but overcoming challenges through community is a sentiment expressed in disability pride and disabled culture. We get to see disabled joy and disabled authenticity for a brief period in this very dark, macabre series. Bravo, Ryan Murphy!

Hughes was not sad or lonely, nor was he desperately trying to integrate into able-bodied society — quite the opposite. His disability was never an issue. Blatant negligence of the police force ignoring the Black, queer, and disabled community was the issue. And it allowed Dahmer to thrive. Just as Jeffrey Dahmer had no regard for life, ableism has no regard for life. And yes, the murder of Tony Hughes is extremely hard to watch. Ableism, white supremacy culture, and racial injustice aren’t supposed to make for easy popcorn-munching television. Series like Dahmer are meant to spark major change in our current justice system.

There are other disabled performances sprinkled throughout the series as well. Nicole Evans, who has osteogenesis imperfecta and is 3’8″, plays a jail librarian, and her disability is not mentioned. Verton Banks, an #ActuallyAutistic actor, plays Kareem. There’s no indication that Kareem is disabled in his brief scene either — but that’s the beauty of it. Disabled people can play able-bodied characters, and characters where their disability is not a plot point. Verton shares his feelings about playing Kareem, “I’ve been fortunate to have been in two Ryan Murphy-produced projects, Fox’s 9-1-1 and Netflix’s Monster: The Jeffrey Dahmer Story. And his productions consistently feature disabled actors. Far too often we are left out of the conversation. Kudos to the casting directors Robert Ulrich, Eric Dawson, and Carol Kritzer for continuing to recognize our talents. Representation is important every day and in all circumstances. And we must continue to celebrate our talents in front of and behind the camera.”

People are making memes of Evan Peters shirtless and romanticizing serial killers, which goes against everything this series is trying to accomplish. Instead, let’s remember the disabled and LGBTQ+ people of color who were murdered, and appreciate the actors who brought them back to life. Their stories should be centered in our conversations. Monster: The Jeffrey Dahmer Story has been viewed over 196.2 million hours in several countries, and we’re still not discussing disability and ableism in the criminal justice system. I think that needs to change. 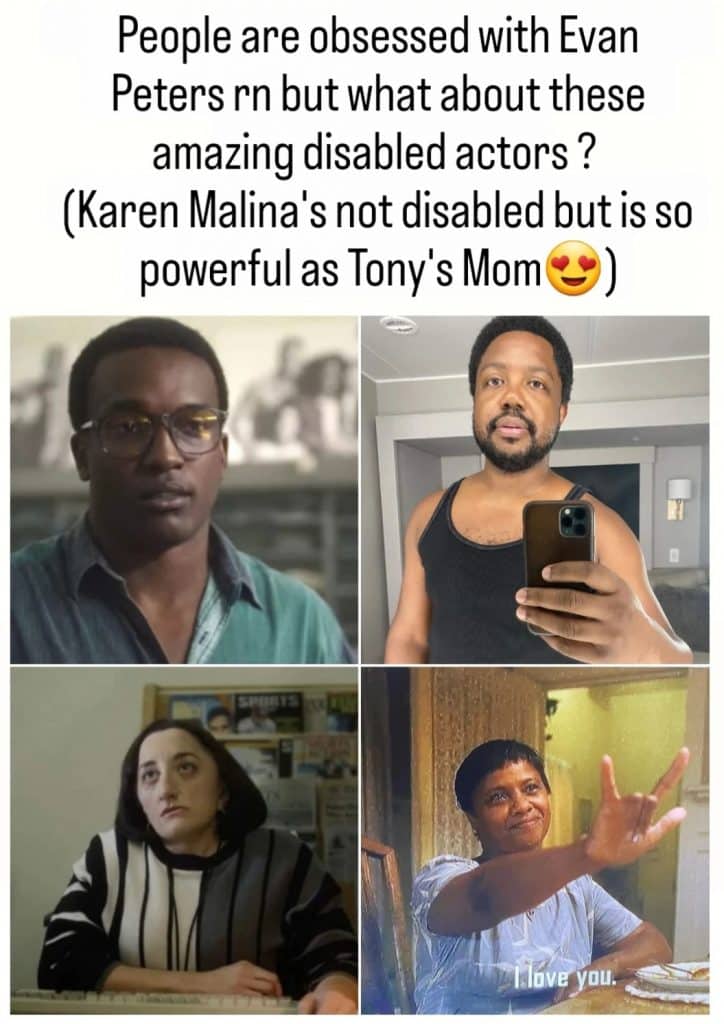 About the author: Erin Noon-Kay

Erin Noon Kay is the CEO & Founder of Claiming Disability LLC. Erin identifies a "fierce disabled entrepreneurial woman," with Cerebral Palsy. She uses a walker and wheelchair occasionally, but she believes it's "OK" to look disabled and is working hard to bring representation for disability in film and everyday culture through media projects and disability related content. She believes "disabled," is NOT is a bad word, but a badge

of honor, a beautiful community, a culture. She has worked in the non-profit, governmental, and business sector for over 10 years.

Now, Claiming Disability, LLC is connected to over 4,000 disability advocates from around the world, including Jim Lebrecht and Nicole Newnham, the Directors/Executive Producers of Crip Camp. A groundbreaking summer camp galvanizes a group of teens with disabilities to help build a movement, forging a new path toward greater equality.

The Hunt for Healing in Life with Mental Illness

Cerebral Palsy: How to Support Your Child

How to Support a Loved One with a Traumatic Brain Injury

Parking with Parkinson’s: When I Was Confronted for Using a Disability Parking Permit